No kidding.
In the evening on the first day when we left Fakarava sailing to Rangiroa (Archipel des Tuamotus, French Polynesia) short before sunset I got the fishing rod out, knowing that this would be the best time to catch something.

I threw the lure in the water and started to release some fishing line, just thinking how much line I should release. No need for thinking anymore. The line started to spin off the reel like crazy. I had a fish on the hook in less than 10 seconds.

Cecilia is my witness.

There was so much tension on the line and the reel came off the rod. Some attachment broke off. I almost lost my catch. Unable to wind up the line with the reel without the fishing rod, I wrapped the line around the winch and winched the fish towards the boat.

A delicious tuna. I cleaned it and put it in the freezer. Next morning Cecilia sliced that fellow in pieces and we already had tuna steaks three days in a row, including today. And guess what we gonna eat tomorrow?

I think I will never top this fishing time in my life. 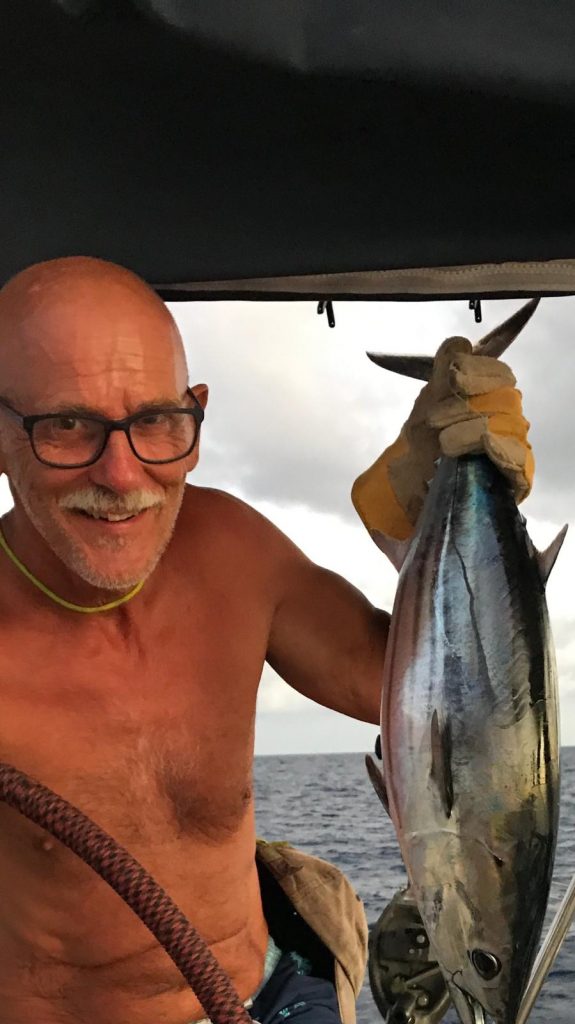 FAULE HAUT almost totally crashed on a coral reef at Fakarava, on an atoll belonging to the Archipel de Tuamotus, French Polynesia.

This is what happened:

I would like to have this whole scenario on a video, because its indescribable.

We were under sails, tacking/zigzagging inside the atoll of Fakarava heading north with a speed of 4.5 to 5  knots.

All of a sudden we heard a grinding sound and the boat slowed down, moving its way up on a coral reef. We got stuck. We hurried to get the tension out of the sails and got them down and rolled up. We had come to a full stop within two and three seconds. Immediately I grabed my snorkel and goggles and jumped into the water to inspect the situation under the boat.

My greatest concern: did we crash the rudder?

Too bad, I don’t have pictures of what it looked like underneath the boat:

We went up on the reef between two coral heads, one on port and one on starboard, each just one meter away from the hull. Had our course been one meter further to port or starboard, we would have crashed the keel against one of these high coral heads that stood there like pillars up to about about 1 m under the water surface, 2 m in diameter. That would have been the death of Faule Haut. The narrow space between these heads was going up slowly like on a hill. That way the boatspeed was reduced slowly (more or less). I estimate, Faule Haut was lifted about 50 cm upwards.

Cecilia helped me to get my second (spare) anchor in the dinghy and I motored 20 meter behind the boat, a little off to starboard. There I dropped it. The end of the anchor rope I wrapped around the winch. I started winching us back the way we came. Well – I tried. It did not work. The tension on the rope was to tight. The anchor started dragging, as I expected. But at least it prevented the boat from being lifted up even more on the reef by the waves and from moving to port against the coral pillar.

I got two more ropes out and tied them together and swam to the corel head that we passed on the starboard side. I wrapped the ropes around the coral head and brought the free end back to the boat. Cecilia wrapped this rope around the winch and started to winch us back. It did work for about 30 or 40 cm, but then it stopped.

I put my goggles on and dived down again to inspect the situation. We had to get back a little to starboard in order not to hit the rudder against the coral head on the port side. So I advised Cecilia put more tension on the rope via the winch while I jumped back in the water and told her to motor backwards under full throttle. I was watching underneath the boat, that our rudder does not touch one of these coral heads. Cecilia did great in following my instructions to where to go and where to turn the rudder. Only me underneath the boat could see the coral heads and the way to get out between them. So Cecilia depended on my instructions. She was handling the steering wheel and the winch at the same time to keep tension on the rope around the starboard winch. It worked. Slowly the boat slid down the reef backwards while the rope that was wrapped around the coral head on starboard kept us from moving against the other coral head on port.

We got free. I did inspect the boat underneath for damage. I could not find any, except some scratches on the bottom of the keel and – of course – there is no more paint on the bottom.

The most important thing: The rudder did not have any contact with the corals. (Neither did the hull.) If that had happened, the rudder would have been crashed, broken off or at least bent, leaving us unmaneuverable.

From what I experienced so far on my cruise (I left my home port in Spain more than 12 month ago), I think my guardian angel has been putting in lots of overtime working 24/7 . Looking forward to meeting him one day eye to eye and shake hands with him. But unlimited thanks and praise deserves my Lord Jesus Christ for assigning such a skillful vigilant one to me. He knew best what I needed.

Cecilia made this sketch for a better understanding: 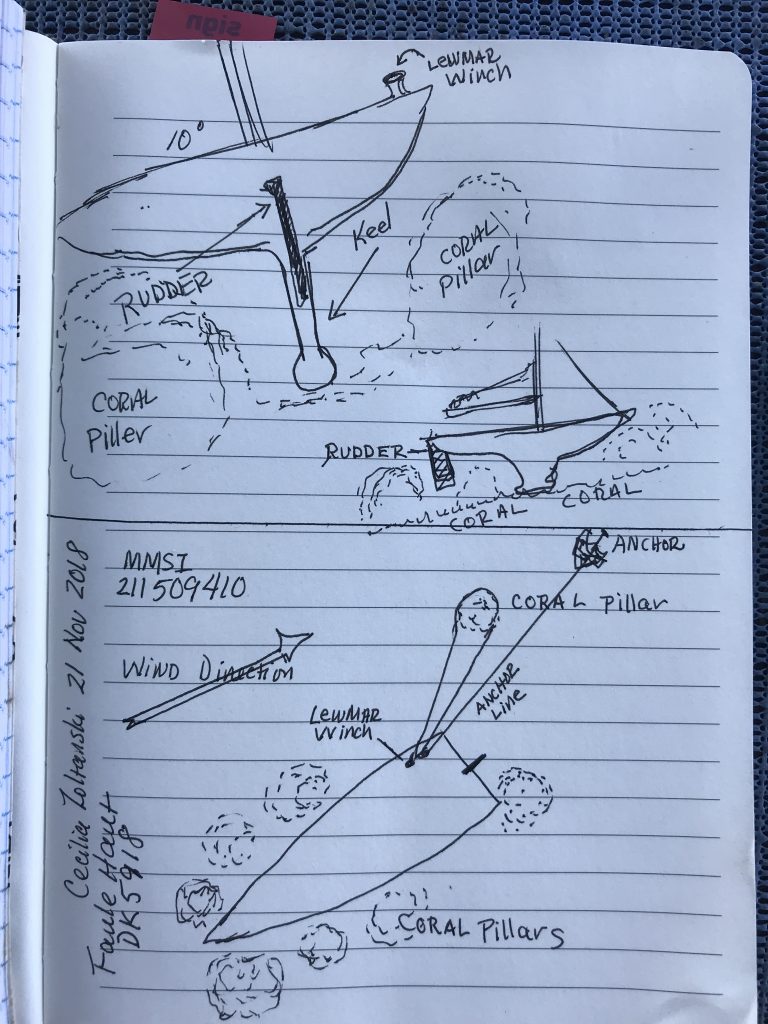