Faule Haut is currently at Bora Bora. My anchor windlass broke and I tried for three days to fix it. Did not succeed yet because of broken tools and drill bits. I have to wait till I am at Tonga, which will be my next stop, to buy new tools. 1250 nm to sail.
During the night from the 30th to the 31st of December, my outboarder, which was mounted on the yacht, got stolen. This is another setback for Faule Haut, for there is no money left to get it replaced.

Actually I was preparing the yacht for leaving to Tonga this morning when two Frech cuties showed up and showed me an impeller, a muffler and a tube, asking if I had those as spare parts on my boat. They tried to get those parts at Bora Bora, but no chance.
These French girlies, Sandrine and Margot, had flown over from France, four months ago and bought a very old steel sailboat at Tahiti. Since than, they are cruising in Frech Polynesia. 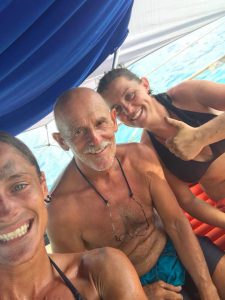 Really courageous. Chapeau, chapeau!
In fact, I saw their boat at Raiatea, a few weeks ago. In Moorea their motor broke down because of a broken impeller. They dared and managed to sail to Bora Bora without any motor power.
Now they are tied to the same dock with their boat right behind me here at BoraBora.

These girls were lucky. Their motor uses the same impeller than mine. And I had a spare one on board. So I went to their boat and helped them to install a new impeller. Furthermore their plastic muffler was in bad shape so that the exhaust pipe came off and did not hold anymore. I heated up the muffler over the gas stove and bent the connecting piece back in shape. We worked for several hours and managed to get the motor running again. 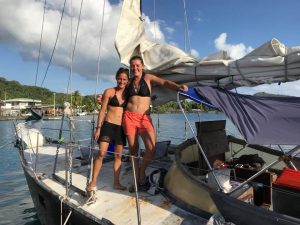 These girls were so happy and thankful, I forgot all my problems with my broken windlass and the stolen outboarder.
Because of the time I lost with the repair job, I decided to stay another night here and leave tomorrow. 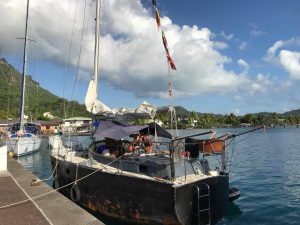 The girls were happy and showed me another island on the map they wanted to see. They are leaving now. And I ? I follow them. They were too cute. I need some company, once in a while.