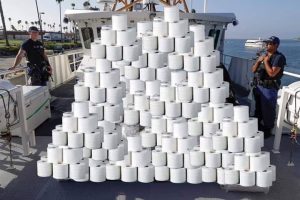 He got caught by the coast guard at the coast of Sint Maarten, Caribbean, smuggeling two tons of toilet paper. Faule Haut has been confiscated.

Skipper Ingo has stolen this picture today from the Website of his home port. It shows the port of Vinaròs at night. 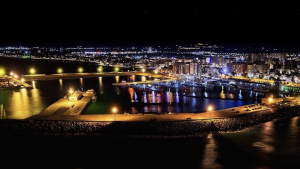 The Skipper is looking forward to his third Atlantic crossing that takes him back home and to mooring up Faule Haut at her home berth, but his enthusiasm is dimmed by the current global virus crisis. Since yesterday this port is closed and he doesn’t know what to expect when he gets back.

Will he be allowed to get to his berth at all? How long is this crisis gonna last?

The Skipper is singing the blues, because the long planned visit of his wife in the Caribbean has been cancelled because of the corona crisis. He was gonna leave the Caribbean after his wife’s visit at the end of June, but depending on the development he is considering to move up his departure a few weeks. If he doesn’t get some other crew that wants to do some sailing with him in the Caribbean within the next few weeks, he will, most likely leave sooner.

This is the latest selfie of Faule Haut Skipper Ingo sailing nude and virus free through the Caribbean, feeling absolutely safe, cause he’s protected by a new roll of toilet paper.

Faule Haut dropped her anchor on March 3, 2020 at 8:30 p.m. in the dark at Carlisle Bay at Antigua. She has come from Nevis which is only 46 nm away from Antigua, but it took her 30 hours of sailing close hauled. Crew had to tack because they were facing into the wind. That was an exhausting cruise. The last 7 miles they motored 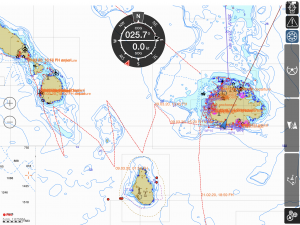 because they were tired and wanted to rest. It’s the skippers second visit to Antigua.

After visiting St. Kitts  (checking in at Basseterre) Faule Haut and crew anchored at  Frigate Bay, a nice beach on the island of St. Kitts. 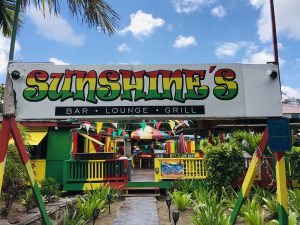 Right now, Faule Haut is at Nevis, at Pinney‘s Beach. Skipper went ashore for some sightseeing. It’s a nostalgic trip because it’s the skippers third visit of St. Kitts & Nevis.

The skipper loves beaches. And here on Nevis you find great beaches either for yourself alone or with some infrastructure, but never crowded.

Columbus named this island „Nevis“ („nieve“ = Spanish for „snow“) because to him it appeared as if there is always a white cloud sitting on top of this Mountain.

And in fact, the skipper never saw it without this cloud.

Faule Haut crew got some rain today for two hours.

Side effect- this marvelous rainbow at our anchorage at Simson Bay.

Crew is getting entertained right now at the Buccaneer Beach bar by live music. 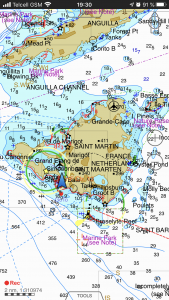 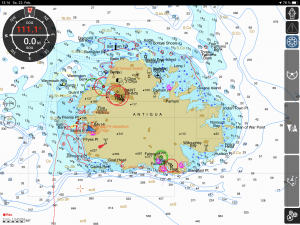 and the Skipper has just gone through the red tape of customs & immigration. It took 3 hours, luckily, all offices were at one place.

On her first visit to the Caribbean Faule Haut did not visit this island because it is not in line with all the other islands of the Lesser Antilles. A little further east. 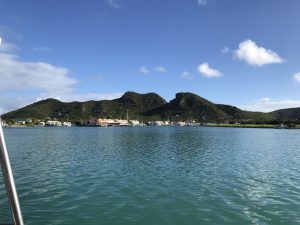 This island is one of the most beautiful islands of the Caribbean. They claim to have 356 beaches, and as I sailed along the coastline I passed a lot of lonely beaches of all sizes, and I do believe them. This is paradise.

The Skipper would love to stay here for a few weeks, but he has to pick up crew at Sint Maarten/Saint Martin next week.

Everything is very clean and the infrastructure is excellent. I think it’s one of the richest and maybe the most beautiful island of the Lesser Antilles.

Faule Haut at home again, namely Guadeloupe (after having spent one night at Ile Les Saintes, between Dominica and Guadeloupe). 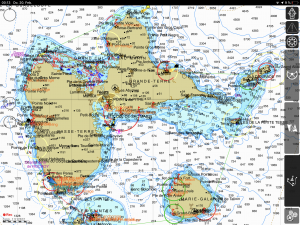 And his visits were not limited by visiting just the coastal areas. With a friend he did some traveling inside the country.

He reached Guadeloupe (BassTerre)  on Feb. 19, 2020 and today (Feb. 20) he will keep on sailing north to pick up German friends at Sint Maarten next week. Next stop will be Deshaise, a beautiful bay on the northwest side of Guadeloupe. From there he will continue to Antigua and Barbuda to Sint Maarten/Saint Martin. If his wife agreed and joined him on the boat, he would stay here for a few years, because of the perfect climate and sailing/snorkeling/diving conditions. He loves the Caribbean. It’s the perfect sailing area which is only outshined by the Southern Pacific Islands (especially French Polynesia, Tonga etc.).

Unfortunately it was raining when Faule Haut passed the most southern point of Guadeloupe, Pointe du Vieux-Fort.

Usually the Skipper bakes his own healthy whole-grain bread on board. But today, having the advantage of being in a port, he chose to get a real French Baguette and croissant for breakfast. He spent last night in the port of Riviere Sens (Basse-Terre), because he needed to fill up his water tanks.

SDA Church at Dominica and its Women Power.

Close to Prince Rupert Bay, you find the The Antioch Seventh Day Adventist Church at Savanne Paille, which is controlled by powerful beautiful women of all ages (the elderly lady at the top is 84) burning for the gospel, preaching the second coming of our Lord Jesus which is at hand. They also have a great preacher, Felix.

Thank you for letting me take part in your worship service. I enjoyed every minute. Also thanks for inviting me to dinner.

Keep up your great work. Always stay close to Jesus.

God bless you all.