Horror in the night 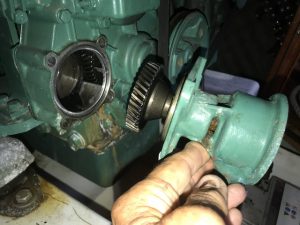 It’s the second time that the skipper’s pee break in the middle of the night saved him from another disaster. He noticed that the floor boards in the bilge where floating around in the pantry. Water in the bilge had lifted the wooden boards up. Panic-stricken he turned on the bilge pump to get the water out, and started to search for the cause. Water, flooding the boat, is a nightmare for every skipper. He could not find where the water came in. After all the water has been pumped out, he set his alarm clock to check the bilge after a few hours. When he got up he saw the bilge filled with water again, pumped it out again and started his search anew. Finally he found out  that it was coming out from the motor, more specific, from the water pump. He took it apart and put it back together, but it was still leaking water. With some help from a friend in Germany, Hans Diesel, he found out that the cause from the leak is a worn or broken shaft seal on the salt water intake pump.

The skipper is relieved to having found the source of this evil. This is the first step to fix it. Now he’s has to find a way to get this specific shaft seal. Mauritius is a very small country/ island, and it’s not very likely to get it here. Probably it has to be ordered and shipped overseas. But anyway – the skipper is happy, that this is a relatively small problem that can be solved once he gets the spare part/parts.