Skipper Ingo and crew have reached Ibiza. The cruise became a nightmare for the crew – all newbies into sailing.

Shortly after Faule Haut left her homeport Vinaros, she ran into heavy weather. Winds up to 38 kn and high waves made sailing very uncomfortable.

When the entire crew got seasick, Skipper Ingo wanted to give them some relief and suggested to make a stop at Islas Columbretes for the night. Everybody welcomed that and agreed. But it was the wrong decision as they all soon found out. 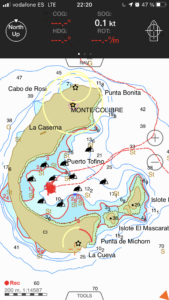 The swell inside the main (horseshoe shaped) island was immens. It took the Skipper 40 minutes to get the boat attached to one of the installed mooring balls.

Then the night was a PITA for everybody. Nobody was able to sleep a single minute on that rocking and rolling boat during the night. Two of the crew even chose to sleep in the salon, on the small seats, because the rocking and rolling was unbearable in their aft cabins. 30 to 35 knots of wind was blowing straight into the bay during the entire night. So right when the sun came up, they left the Columbretes. Luckily, shortly after, the wind calmed down to 15 knots and they had a calm cruise to Ibiza. The crew fell asleep and stayed in bed, having a hard time to recuperate during the next 24 hours leaving the Skipper on guard for the second day and night in a row. Nobody was able to do their share of the night watch.

Finally short before they reached Ibiza all felt well again and the skipper could sleep for two hours. Skipper Ingo had prepared bread during the night and in the morning the wind died down and they took all sails down and stopped for breakfast with fresh baked bread and rolls, 3 nm off the coast of Ibiza. After breakfast they waited a few hours for the wind to show up again, but in vain.

Jonas made the best of the break and went for a swim. He even had the power to dive down a few times in 18,5° water to scrap the barnacles from the prop.  No wind showed up, so they decided to motor the last three miles to the island.

They were relieved to reach Ibiza and all crew had regained their strength and started to cook some vegetable stew. 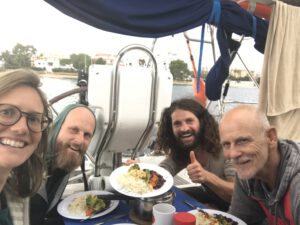 The first warm meal after two days of sailing.