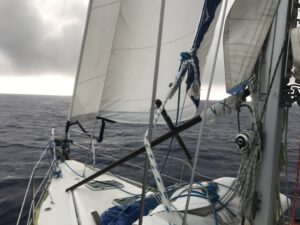 After sailing 900 nm over the Atlantic, Faule Haut ran into the second heavy thunderstorm on her third Atlantic crossing with such strong winds, that her whiskerpole broke again. This was the fourth whiskerpole that broke on her circumnavigation (one aluminum, two bamboo, one wooden). This is another great loss, because so far it has been used for half of the sailing time during this crossing and without it it will slow down Faule Haut quite a bit now.

Skipper’s guess: It will add about three days of sailing time on the Atlantic crossing.

Luckily though, the pointed ends did not poke a hole in the genoa, nor did it do any other harm on deck like breaking the deck lights (= windows) 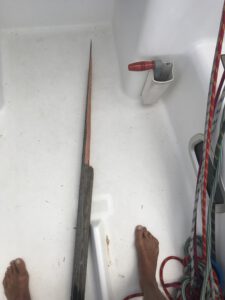 This happened early in the morning while Skipper Ingo was still sleeping. He woke up too late to prevent this damage. In fact, he woke up by the noise when the pole hit the deck. Luckily the thunderstorm didn’t last very long.

Somehow it’s good that the Skipper didn’t realize that thunderstorm earlier.In a storm you can’t sail with a pole. You have to take it down. If that pole had broken while the skipper was trying to dismount it, it could have injured him severely. Look at that pointed pole and imaging it breaking right while you are trying to dismount it and get spiked or impaled. You have to be on a small sailing yacht in a storm to understand and see what strong (sometimes uncontrollable) forces are working on the sails and ropes in high winds. It’s a tough thing to dismount a whiskerpole in high winds when you are alone. Reflecting on this, the Skipper is thankful that he has been protected again and comes to terms with the loss of just the pole.