Skipper Ingo and his Crew Manuela, Reto and Jonas just left the Spanish mainland for a ten days cruise heading for Ibiza. 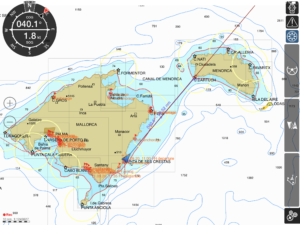 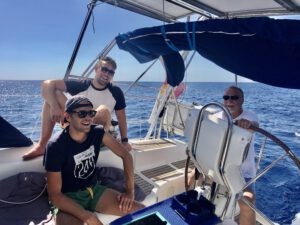 Skipper Ingo and two good friends had a great time there yesterday and the day before. The mooring was calm, the air warm and not humid. Conny & Manni decided to sleep outsid in the cockpit and enjoyed the stary night. 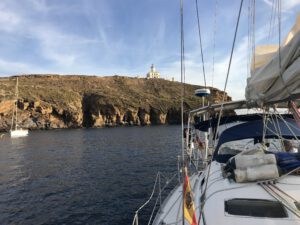 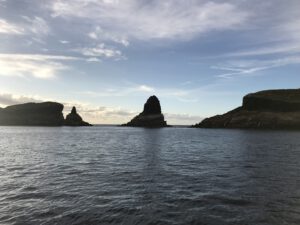 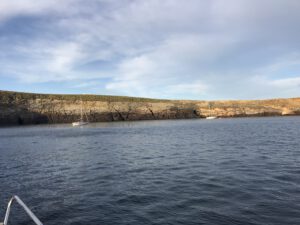 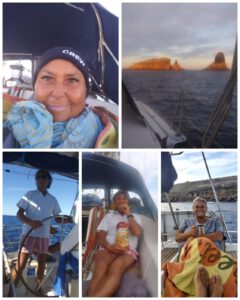 Skippers 6th visit and … he’ll be back. So will his friends.

By the way – Skipper Ingo is alone on Faule Haut, ready for you to board. He’ll take you (almost) any place you like. Two double berth available almost for unlimited time.
No COVID-19, no masks on bord – just freedom and fun.

On June 26th 2020 Faule Haut has reached her home port after having sailed over 40,000 nm around the globe. She has been on her circumnavigation for 2 years, seven months, and 22 days, which are 965 days.
About 32.000 nm Skipper Ingo has sailed singlehand, crossing the Indian Ocean, the Pacific and the Atlantic alone.

This picture shows Skipper Benno and Skipper Ingo after reaching Vinaròs. Benno joined Faule Haut at Portimao, Portugal and accompanied Ingo on his final leg to his home port.

Skipper Ingo is sending a big THANK YOU, to all his friends and followers who accompanied him on this circumnavigation via WhatsApp, Facebook and whatsoever.
Please note, that Faule Haut is ready to receive guests for cruising the Mediterranean on from September 2020.

At this very moment, June 25, 2020, 01:00 p.m. SY Faule Haut is leaving Cala Portinax, Ibiza Island to sail the last leg (95 nm) of her circumnavigation to her home port in Vinaròs, Spain. On board are Skipper Ingo and his best sailing buddy Skipper Benno. Benno joined FH on June 13, 2020 at Portimao, Portugal to accompany Skipper Ingo on his final leg. 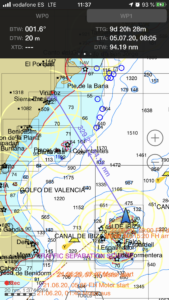 We enjoyed her company and wish her all the best on her next cruise. She is gonna fly to Mallorca to join another crew on a cruise to Sardinia.

Now it’s plain to see, that Faule Haut has switched her ponds. 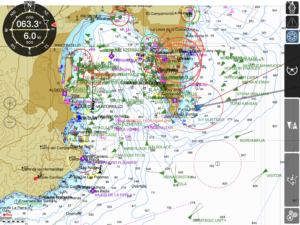 She left the great pond and is now sailing inside her home pond, the Mediterranean Sea. She is heading to Ibiza. That’s less than 400 nm. ETA May 22, 2020. 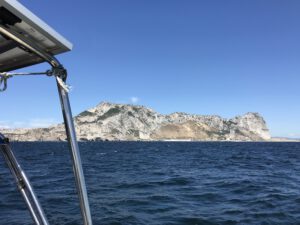 While Suzana and Skipper Ingo were sitting on the foredeck to patch the mainsail, Benno was in the cockpit at the steering, when all of a sudden he shouted: “Something is smelling here. Smells as if something is burning. There must be something burning inside.”

Being 10 nm off the coast, it was sure that that burning smell must have come from Faule Haut.

Fire on board is really the worst case scenario on a boat. Terrified, we all hurried down the companionway. And in fact, it smelled as if some plastic was burning. Skipper Ingo turned off the power supply from the batteries. This of course killed the autopilot, so he ordered Benno to take over the steering while he and Suzana kept on looking for the source of the smell, putting their noses in every nook and cranny. They expected to find a short in some wire someplace. Skipper Ingo checked the house bank (batteries) under his bed. All ok.

It took them several long minutes to find the cause. It was the electric water boiler which in fact, got SWITCHED ON BY ITSELF, (nobody was using it) without having water in it, and then the thermostat didn’t switch it off. It started to melt the plastic what made that nasty smell.

The crew was relieved, that there was nothing wrong with the boat.

By the way, that water cooker comes from China (like the corona). It was bought at one of these China stores at Vinaròs. No more Chines crap on Faule Haut.

Great joy for Skipper Ingo. He has found help for the repair. With such a nice helper it didn’t  feel like working anymore. 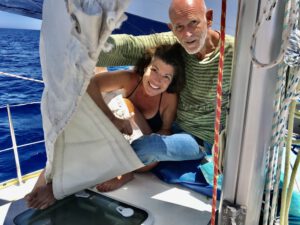 He and Suzana managed to spend several hours sitting on the foredeck finishing the sewing, stitching and patching of the main sail. 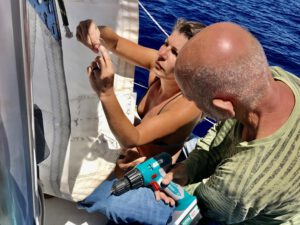 Since the needle had to be pushed through up to seven layers of sail cloth at the edge, Skipper Ingo used a drill to make holes for the needle. Then, Suzana did the stitching.

The sail is ready, but it’s getting dark. Skipper Ingo will install the sail tomorrow.

The forestay is breaking for the third time on her circumnavigation, due to the foresail furling system which doesn’t work properly. The pipe on which the Genoa rolls up got jammed. It doesn’t turn freely around the forestay but turns the forestay steel wire as well. This of course puts force on the wires and they have started to break. Already four of the nineteen strands have broken. 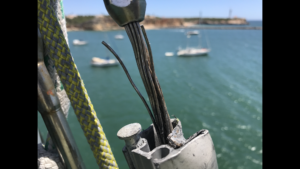 In order to fix this problem the entire furling system has to be dismounted and taken apart. But you need to be in port or in a boatyard to do that and you need certain spare part like pipe, connectors and more. Today the crew motored from their anchorage to a place right opposite of a boat yard and dropped the anker. They had the intention to to ask for some help next morning. During the wait, Skipper Ingo got up the third time on the mast and worked on the jammed furling system. He could do some fixing, but this is only a temporary solution without having the necessary spare parts.

Due to the Skippers repair job the crew decided to change their plans and forget the boat yard. They startet the motor and tried to get the genoa rolled out. It worked, even thought the furler jammed a little. After motoring for 5 hours good wind came up and they got 96 nm closer to Gibraltar.