Many times the Skipper has been asked what he eats on such a long transocean crossing. He lets you know and recommends something he himself created for the very first time, adapted from different YouTube recipes he studied. He didn’t expect such a delicious outcome:

1 can of kidney beans
1 can of mushrooms
1 big onion
4 pieces of garlic
4 table spoons (TS) of each: cashews, almonds, walnut
2 TS lin seeds

2 TS olive oil (for frying the onions and garlic)

You should add 1/2 cup of oats. The skipper was going to do it as well, but forgot. Oats help to glue the mix together. He also wanted to put corn in, but the servings were too big already.

He chopped all nuts, the onion, garlic and the mushrooms and meshed the beans. The lin seeds he soaked in water for fifteen minutes. They also help to make the whole mixture gluey and bind the ingredients together (the vegans say: that substitutes the egg to bind it).

Then he fried the onions and the garlic in a pan and added this to the other mixed ingredients and formed the patties.

And now comes the trick: SQUEEZE THE PATTIES REALLY TIGHT AND BAKE THEM IN THE OVEN, instead of frying them in a pan. That way the stay together and WILL NOT FALL APART (as you can well see on the picture).

Afterwards you may fry them in a pan – just one minute on each side.  Worked perfectly. Didn’t think it would be that easy. They became crispy outside and stayed juicy inside. And the nuts also added to make them crunchy. 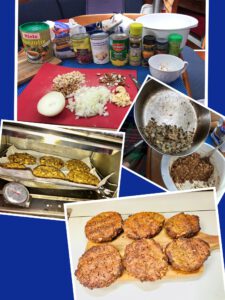 In nutititional value and in taste they cannot be topped by any beef burger. 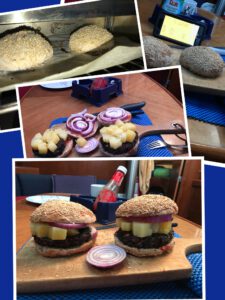 They were delicious and will be put on the Faule Haut Menu for ever, because the Skipper became a vegetarian on his circumnavigation.

And…  did he just save a cow from dying ?

Looks like the Skipper got carried away. Too much time on a transocean crossing.

The buns had to be made by the skipper as well, ‘cause the next bakery was 1,200 nautical miles away. No “sail through” McDonalds, Burger King of KFCs on the Atlantic.

Those were his “first ever” buns.

(non vegans may add an egg).

Just mix everything, let the dough rise for two hours, knead, form the buns, wet the top and spread some sesame on it, and … in the oven.

Too bad, no fresh tomatoes nor lettuce on board. The Skipper could not find canned lettuce at the supermarket at Guadeloupe.

So pineapple and onions where the only toppings. It still was a feast.

The Skipper knows – with the toppings you can do better and have more choice than he in the middle of the Atlantic. 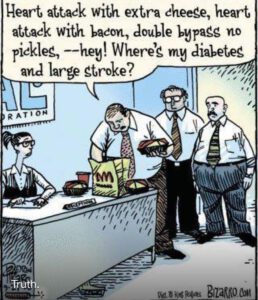