Dismounting the Wiskerpole in a storm. 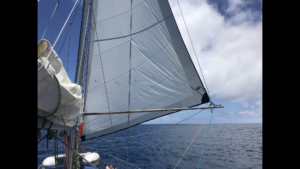 Skipper Ingo  wakes up in the morning by the noise of a storm and jumps on deck. 45 knots of wind blowing. He had the whiskerpole mounted during the night but now being in a storm, he has to take it off. Usually you do that earlier when you see the storm coming, because once you are in the storm there is so much tension on the sail and on the ropes that make it hard (almost impossible) to dismount it. But if you don’t take it down, definitely your sail would tear apart and be gone. In fact, this is one of the most dangerous moments on his cruise, getting the pole off in a storm, being alone. On a conventional (bought) aluminum whisker pole you have a shackle (something like a “quick release”, at the end on that side which is attached to the sail. But since this is just a jury rigged wooden pole it doesn’t have that quick release. This means, you have to dismount the end that is attached to the mast first. And if you do that, it’s very hard to hold the pole and not getting kicked overboard by it. If you can’t hold it, it flips around by the wind and might crash your deck lights (= windows) or anything or evening the skipper.

But luckily it worked and he didn’t get hurt nor did it do any harm on deck.You always take the pole down BEFORE a storm (if you can).