At two o’clock in the morning my Skipper woke up from a slapping noise.

He went on deck and noticed, that the main sail was almost entirely torn off the second batten car/slider that runs on the track along the mast. But even worse, the halyard got jammed on the tip/end of the upper spreader/crossing. This could only happen because he had broken the upper most batten car/slider already a few months ago and could not replace it yet. 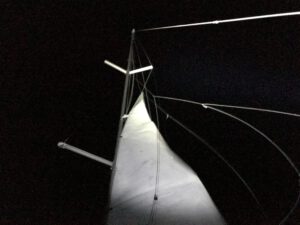 There is a little groove at the end of the spreader where the halyard got in between and stuck. Pulling he halyard tight meant pulling it deeper into the groove. Pulling on the sail did the same thing. There was no way to get the halyard free by pulling either one. The only solution was to climb up to the spreader and clear the rope. It was impossible to get the main sail down. And the wind was picking up. The main sail had to be taken down fast. Getting in a storm with a sail that you can’t get down would be disastrous.

He started the motor to get some more speed and keep Faule Haut on track. That reduced the rolling movement of the boat slightly, but still the mast was swinging from port to starboard.

So he got his climbing gear ready and started the ascend.

Skipper Ingo hasn’t gone on this circumnavigation unprepared. Knowing that unexpected things can happen on an adventure like this, he took a climbing course at a school in Reutlingen a few weeks before he left, and bought all the necessary equipment to go up the mast alone. It was worth the cost.

The ascend was more than a PITA. The skipper got close to collapsing and giving up when he was 2/3 up the mast, scratching and squeezing his fingers, swinging away from the mast and bouncing against it several times, but knowing there was no other solution to free the rope but by getting up close to the spreader he kept on climbing. Once he reached it, it was easy to get the rope clear.

When he got down he saw the damage done to the sail attachment. It will be a tough sewing without a machine, to get that sail ready to be used again.

And this sewing has to be done while the sail is partially still attached to the batten cars on the track of the mast. No way to take the sail off in those winds alone. Well – it might work to take it off, but it’s hard to get it back on alone, except Faule Haut would run into a calm/doldrums (no wind period/area), but the Skipper won’t wait for that.