Over the last 1,000 nm Skipper Ingo saw lots of jellyfish passing by Faule Haut. He got curious what they exactly look like and caught one with a bucket. It’s one of the most poisonous jellyfish that exists. It’s a Portuguese Man o‘ War (German: Portugisische Galeere)

(The Skipper swears, its not a blown up fancy Billy Boy Condom in the bucket.) 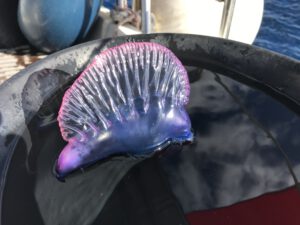 It had long tentacles of over 6 m which glued to the deck when he pulled it on board. Its tentacles are poisonous and can do really harm to your skin. He had a guest on board at the Mediterranean once who suffered severe burn on her legs. There are people who are so allergic that they even can die if they get in contact with these tentacles. 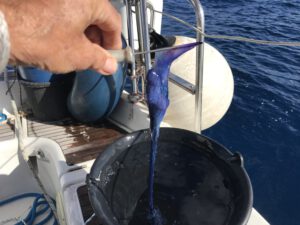 But they look kinda pretty, don’t they?  It looks like it is filled with air because it’s totally transparent, but actually it’s full of jelly. When Skipper Ingo poked in it with a screwdriver, it didn’t collapse strait away (like an air ballon) but took some time for the jelly to run out. Well – they are called jellyfish -that says it all.

After that, some dolphins showed up and where playing at the bow. I shot a video but can’t show it here yet.