Right now Faule Haut received cellphone network from the southern coast of Portugal and is able to post this latest news about what had happened on her leg between the Azores and Portugal.

Another setback for Faule Haut on her last leg so close to her home port. Her foresail/genoa has been ripped to pieces in a storm.

Skipper Ingo had not intended to stop in Portugal but he will have to. He can’t sail anymore because he hasn’t repaired his mainsail yet, and unfortunately he lost the genoa in a storm yesterday. It had blown apart – unrepairable  – a total loss of a 3,000.- € foresail. Like the breaking of the last whiskerpole it happened while he was sleeping. After cruising for more than two years and seven months he got so much used to live and sleep on a rocking and rolling boat, that he hardly wakes up in a storm not even if the rocking gets violently. He woke up too late by the noise of the flapping remnant pieces of genoa. The genoa tore into two parts and they were flapping violently at the furling system. There was so much force on the sail and the sheets, that it took him four hours to secure the cloth and get it wrapped around the furler. He was scared that the furling system with the forestay would come down, so hard was the wind power working on that forestay in 40 knots of wind.

He was sailing with the genoa and the storm sail together and from then on only had the storm sail. With that alone he only made one or one and a half knots of speed when the wind calmed down to 25 knots.

He will have to take the genoa down as soon as possible and install the spare one. But he can’t do that on the open ocean, especially since he is sailing singlehand. So he decided to make an unplanned emergency stop at the port of Ponta Delgada, Portugal. He hopes to find some help there to pull up his second genoa. Also he will have some time to keep sewing on his mainsail, which could not have been used for over two weeks now. He hopes to finish his stitching and be able to leave the port with two working sails. 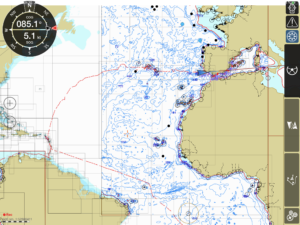 In spite of these problems Skipper Ingo is of good cheer, for here he has experienced another protection because the loss of the genoa happened so close to the coast of Portugal, about 80 nm offshore. If this had happened on the middle of the Antlantic, it would have been much worse (having neither the main sail nor the genoa). Being so close to a port, he decided to use the motor to get to Ponta Delgada. Since he left Guadeloupe he has sailed 3,822 nm and wisely has only used the motor sparingly only for eight hours. Thus, he has enough fuel to make it to the next port under motor.

When he was securing and fastening the remains of his genoa, the jib sheet on the starboard side fell into the water and wrapped around the prop. This scared the the skipper because now he was partially  unmaneuverable. He could neither sail properly with just a six square meter storm sail, nor could he motor. He had to wait till daylight next morning to dive down and clear the prop. To his surprise, he found another rope blocking his prop. So somehow, it was good that his jib sheet fell into the water. He would not have noticed the other rope blocking the prop.

Next stop, most likely, will be Queensway Quay Marina at Gibraltar for refueling. Supposedly, the diesel there is tax free and cost only 48 Cents. 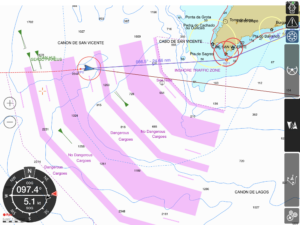 Crossing boats have to yield to the ones inside the TSS. Faule Haut just sneaked in before three other boats got close.