After having spent exactly three month at the Canary Islands, SY Faule Haut is leaving Tenerife. Skipper Ingo spent two month there with his wife and one week with his niece and two lovely kids.

Faule Haut has new crew on Board: Lucien, a French guy and three German „Wandergesellen“, Ben, Till & Paul. Lucien is sailing to Madeira, the other three sail until Gibraltar.

They startet from at the port of San Miguel and sailed and motored to Santa Cruz, where they are relaxing right now at the port being in limbo because there is no wind. The forecast is bad – too little wind, and blowing in the wrong direction. The crew can only hope the forecast is wrong, because if if comes as predicted, it would take them forever to reach Madeira.

Anyway, the crew is in good spirits and ready to take whatever comes.

Already the new crew showed their skills. They are not just good handymen but also know how to cook. Under the guidance of Paul, they prepared a traditionell meal from the town of Hamburg. 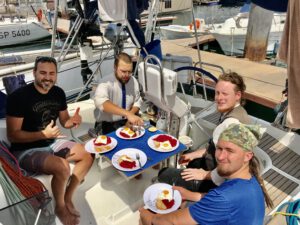 And now: waiting for the right wind.

And… there is room available for the cruise from Gibraltar to Vinaros (Valencia). And one place available from Madeira already. ETA Madeira is Saturday, 17th of April.

leaving Madeira on Monday 19th. ETA  Gibraltar is 27th of April. Leaving Gibraltar the next day.

If you want to join, send a WhatsApp message or email. Be aware that that Skipper Ingo can only receive it when he is close to the shore and has network connection.