The last leg was her longest one ever. Leaving  Cape Town, South Africa on Dec. 15, 2019 it took her 49 days to reach Barbados after sailing over a distance of 5,350 nautical miles.

Skipper Ingo and crew Immanuel (who came on the boat at Durban, South Africa) dropped the anchor at Bridgetown, Barbados on Feb. 2, 2020 right after sunrise.

Reaching South Africa, after going through some nightmare experiences south of Madagascar, Skipper Ingo wasn’t afraid of anything anymore. He knew, that the worst was over. He was laughed at, when he said to his skipper friend Warren, that he  expected the Atlantic Crossing to be a “walk in the park”.

But it was exactly that. It was an easy cruise with neither storms nor bad weather nor bad waves nor bad whatsoever. And – having crew Immanuel on board – it was a lot more relaxing sailing, especially during the night. We shared the night watches. I was in charge until five o’clock in the morning and then he took over.

A great blessing was our whisker pole, that we luckily found and bought on the very last day in Durban. The first consecutive 15 days we had light winds from astern when we used it continuously. I estimated that this shortened our passage of about three or four days.

Well – not everything went smooth. Too many things broke during this passage, things that are costly to repair or to replace:s

The genoa furler got stuck – more precisely – the halyard swivel on top. We had to climb up the mast three times to get it working. Here I have been lucky that I was not singlehand sailing but had crew Immanuel on board. Going up the mast with both sails hoisted in the middle of the Atlantic on a rocking and rolling boat is no fun and doing this alone is even worse. Being two on board, one could use the winch to pull the other one up to the top. Climbing up there alone is more than a PITA.

The genoa halyard got entangled inside the mast with the VHF-Antenne cable and tore it apart. Replacing this, is very complicated because that cable runs almost through the entire boat from the navigation table up to the antenna on top of the mast.

After that, the genoa got torn when we were right between Africa and South America.  It started with a little tear/crack of about 20 cm.

We wanted to patch it, but the tear was to high to reach to. At that time we had winds between 20 and 25 knots, – too high to get the genoa down from and off the furling system. We had to wait for the winds to calm down. Unfortunately it took a week for the winds to get down to about 10 knots. This was short before we reached the doldrums zone. By then, the tear had expanded to almost one meter length.

So we took the genoa off to patch (sew) it. But we soon noticed, that it would take an entire day and we decided to hoist the spare genoa. I was well prepared tor this circumnavigation and carried a spare genoa as backup.

After two weeks sailing with this second genoa, it started to get three little tears as well. But here they were in the lower section so we were able to reach and patch them with duct tape, without having to take it off the furling system. We were scared first, that the patches were efficiently stopping the tears from getting bigger. But it worked.

The leaking shaft seal on the motor hasn’t  been replaced yet and the leaking got worse, when the motor was running. When we were motoring through the doldrums for about 58 hours, we had to pump saltwater out of the motor bilge every two hours, day and night. That was a big nuisance. Wisely though, I had an electrical mobile pump on board which made this job easier.

The worst thing (because most expensive) however is, that my battery house bank is toast – broken – like the inverter. They don’t hold the charge any more. We had to shut off the fridge in order to keep the auto pilot running. They get charged during the day by the solar panels close to 13 volts, but during the night they drop down fast to 11 volts. Amazing, that the auto pilot was content with that low voltage and didn’t refuse to work.

It was a bank of three 220 Ah GEL batteries, 660 Ah all together. I expected them to last longer, but if I look back I have to admit that I used them extensively. The fridge running 24/7 plus heating the water for tea and cooking (via the inverter) every day means a daily charge and discharge which all sums up to about 800 charge/discharge cycles over a period of two years and three months.

Repairing the two genoas and replacing the battery house bank and the inverter will be a big kick in the wallet. Since I’m broke and busted, I don’t know how to finance that. Looks like I need to find a job in the Caribbean to make it back home. Luckily, I will get some friends soon on board here who contribute a little to my immense costs.

One of the toilets broke down as well and needs to get fixed.

The winch on the starboard side has to be taken apart and cleaned. It doesn’t work anymore. I hope it’ll work again after cleaning. Luckily – since, this winch quit working – we were sailing only one port tack, so we didn’t need this one on the starboard side. I have to wait to be at anchor to take it apart for cleaning. Too much movement while sailing on the Atlantic.

The anchor switch is broken and has to be replaced.

Two windows are leaking and need to get sealed.

A door look is broken and needs to be replaced.

Three covers of the batten pockets on the main sail are torn off and have to be sewn on again.

Two genoa’s have to be patched now. I need a professional sailmaker to do that. And these guys like to rip you off, knowing that you depend on them.

I’m happy to be ashore again, after being on the Atlantic for 49 consecutive days, but there are a lot of costly repairs to be done. I know I said that before but here it comes again: „CRUISING IS BOAT REPAIR IN EXOTIC PLACES.“

After having met over hundred other skippers on my cruise who made the same experience, I found some consolation when we shared our experiences and they said: “We are repairing around the world.”

In case you want to know why our track through the Atlantic hasn’t been like a straight line but has two curves, here is the explanation:

All around the world, close to the equator runs a “belt” which is called the Intertropical Convergence Zone (ITCZ). As you know, the hottest place on earth, you will find close to the equator. As the surface temperature increases at the equator, it heats the air above. The warm air rises and expands, which lowers the air pressure at the surface, creating a “vacuum” close to the surface of the earth or (in this case) over the ocean. This “vacuum” has to be filled and will be filled by air flowing towards the equator. Another word for this “air flow” is wind. From the area south of the equator, the wind is flowing/blowing towards the north. From the area north of the equator, the wind is blowing south. And since the earth doesn’t stand still but is turning, the wind is diverted. This diversion is known as coreolis (Coriolis Kraft) and creates the “trade winds” (Passat Winde). They got there names from the fact that the first sailing trade ships made use of these winds to trade/transport their goods over the oceans. North of the equator the trade winds are blowing from the north-east, south of the equator from the south-east (see map)

You see that north of the equator runs another belt with calms parallel to it around the earth which is called “horse latitudes” (German: Rossbreiten). A funny name!? Yes! They got this name because once there was a flotilla of sailing ships that got caught in these calms for weeks and the crew was starving to death when finally they decided to throw the horses over board to lighten the ship and save water and food.

Because of different land masses spread over the earth, the ITCZ is not running as a straight line. Neither does it have the same width. The width varies between 100 and 300 nm. In the area where we were sailing, crossing the equator, the ITCZ, or the doldrums/calms are between 200 and 300 nm wide, roughly, depending on the time of the year and some other factors. According to the “Pilot Charts” ( a collection of maps with weather patters all over the world), we knew, that the doldrums belt would be at its smallest/narrowest between longitude 25° and 30°, a little bit north of the equator. And we knew, that there wouldn’t be any winds blowing in the doldrums. We knew, we would have to cross the ITCZ motoring, and that we would have limited fuel on board which only allows us to motor less than 300 nm. Therefore we aimed for the spot, where the ITCZ is at its smallest AND we crossed this zone in a RIGHT ANGLE (else it would have been a longer distance). If you can’t get out of the doldrums by motor, you might get stuck there for weeks or even months. So to us, it was important to know all this and act accordingly. 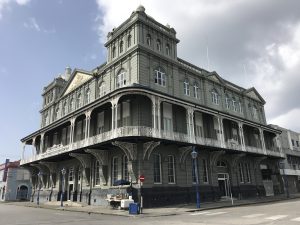 Enjoying to be able to sleep like you landlubbers: No night watches, no heeling, no rolling, no alarms from the clock nor from the auto pilot, no reefing, no adjusting of sails or course in the middle of the night.