This is a crew member/friend, Veit, of the notorious sailing vessel Faule Haut. This photo was taken just five days ago in the Caribbean, at the “Diamond Rock”, close to Martinique, where my crew stopped for some scuba diving. 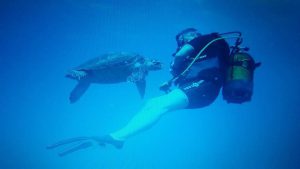 These adventures is what you could experience when you come on board.
In fact, he told me, that he even got a kiss on his goggles from “Paula”

the sailing vessel with the German Skipper Ingo on board, who is on route to Guadeloupe, Caribbean.

I hope you weren’t worried about us some days ago when you couldn’t detect us on www.marinetraffic.com. We had turned off our AIS device for two days, or to be more precise, the active sending of our local position after we were being attacked by pirates.

After having successfully sailed through the crowded Strait of Gibraltar we were sailing along the coast of Morocco going south towards the Canary Islands.

We have a DSC marine radio on board which, if turned on and in standby mode, can be activated by another DSC radio on another ship via our MMSI number or via an “All Ships Call”, either from another boat, or the coastguard.

On Nov. 16, we were bothered a few times by several All Ships Calls from the coastguard at Tarifa. We were already 70 miles south of Tarifa, so the message did not come in clearly enough to be understood entirely. They were giving out a warning about three or four men in a boat. That was all we understood. As I said, we did not understand everything and we thought that they were talking about a refugee boat because that area is full of them. It’s a classical route for the refugees from Africa to the Spanish mainland. So we were not paying much attention to their warning and decided to stay clear of any refugee boat unless they are in danger. We were soon to find out, what Radio Tarifa was talking about.

They issued a “Piracy Warning” with their “All Ships Call”, but we didn’t understand it entirely.

A strong squall, a gust of wind, sent from heaven, saved our boat, maybe even our lives.

Am I exaggerating? Judge yourself after reading.

I was alone on deck since 4 o’clock. It was me who was on guard, to keep a lookout.

My friends Sabine and co-skipper Benno were sleeping in their berths.

We were under full sails – beating – which means close hauled – going 6,5 knots in a 25 knots wind.

when I saw a small boat coming straight towards us.

According to the IRPCS (International Rules for Preventing Collisions at Sea) I made a slight turn to starboard to pass it on my port side.

But instead of staying clear it was turning to its port side, so that it was coming straight to me. It forced me to to make another turn to starboard to avoid a collision. I was not willing to make another turn because I was under sails and would have lost my speed and come to a stop. With my slight turn to starboard I had signaled them that I will pass them on my port side. The fact that they then  changed their course even more to (their) port side let some alarm bells ring in my head. Some kinda shit was about to happen.

Later on it was clear to me that their intention was to make me loose my speed and come to a halt so that they could lie alongside on my port side to enter.

On board were three men, waving their arms, signaling me to stop and/or to make a starboard turn.

A lot of things came to my mind. I’m a good natured guy, that doesn’t expect the bad first in other people, so I thought maybe they wanted to warn me about something. Maybe a floating container or something else. I could not decipher their waving and shouting. Only that they were trying to stop my boat.

When they noticed that I was not wiling to stop or turn, they turned starboard and made another full turn and were coming towards me again in an angle of about 20 degrees. I kept on going strait. Still they were shouting and waving their arms signaling me to stop.

Now a big flow of adrenalin woke me up. This was a serious attempt to stop me.

“All hands on deck. Possibly a pirate attack.”

woke up my friends and maybe someone on the mainland Morocco, 23 nautical miles away.

While I was going through all kinds of counter procedures in my head I bent down to start the Motor.

Suddenly I stumbled and fell hard on the seat in the cockpit because a very strong squall had hit into the sails. This caused the boat to make an instantaneous sharp turn to port, about 20 degrees or more.

(A boat sailing close hauled does that always when hit by a big squall. It’s called “weather helm” german: “luvgierig”)

In the meantime they were only a few meters away from my bow, a little to my port side, still coming straight towards me.

This quick turn to port was in no way intentionally executed by me, but was caused by this sudden big squall. The Faule Haut turned to port so fast and was about to crash into that other boat. Their helmsman speeded up and turned their boat to starboard to avoid a collision within the last second.

By now, my buddy Benno came up the companion way. Sabine, as a women, did the right thing and hid down below, watching through the windows what was going on

This sharp turn towards them, endangered their lives and their boat and to them this turn must have appeared as a counter attack from us. It looked as if I tried to crash into their boat regardless of even wrecking my own boat.

Me myself would never have dared to make such an aggressive turn.

Yes – from then on it was clear to me that they were pirates. You could tell by the look at their boat and how they behaved.

The pirates must have been confused. I will never know what was going on on their minds but I think they thought that with us, they would not have an easy game.

I asked Benno to get the portable radio and act as if he was calling for help.

For about three minutes they kept on  following us, probably thinking how to proceed with us.

Long scary minutes to me. Finally they turned round and went towards the coast.

Probably we were lucky that they were impressed and intimidated and maybe not that courageous or wicked enough to proceed. Might have been beginners. Even pirates have to start from scratch somehow.

Benno was skeptical first that they were pirates that wanted to rob us. Well – he was still sleeping when they approached us.

He thought that maybe they wanted to sell us some hashish, marijuana or other drugs until he was on duty, when he received another “All Ships Call” from the coastguard at Tarifa. This time he fully understood their warning on the radio. It was a Piracy Warning saying that there was a boat in our area with three or four men trying to stop other boats.

Too bad that I got my iPhone out too late to get a clearer picture of them, but I had other things going on in my head and almost other things in my pants.

Have a look at the photo. 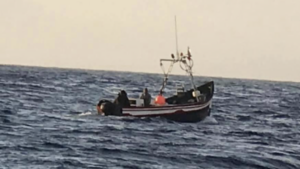 They had a wooden boat of about 6 – 7 m length, equipped with two well oversized outboards. Typical for pirate boats.

Furthermore with a metal rack full of antennas, lights and electronics, as you can see well on that picture. Also typical for a pirates boat.

There was no fishing gear visible whatsoever.

Also that boat did  not have a passiv radar reflector. Why not? That’s obvious. They don’t want to be seen or located. When they left, I only had them for about one nautical mile on my radar screen (because of the missing radar refectory). Other similar boat I can see for about 12 nm. Definitely another sign for a pirates boat.

What are three men doing on a open boat like this in the morning at 7:40, 23 nm away from the coast? Without any visible fishing equipment.

It was exactly the boat, the coastguard of Tarifa had issued a Piracy Warning in an “All Ships Call”.

That attached photo ain’t that clear but to me it looks as if they disguised or hid themselves with masks. One of them covered himself up with a blanket when they noticed that I took pictures. Another one hid entirely.

I will send that photo to the Tarifa coastguard. At least they get a picture about their boat

Usually these pirates don’t kill you straight away, but they steal all your money and all your electronic devices and gadgets.

If they had stolen all our electronic maps, iPhones, iPads, board computer with all the software that we need for navigating, our cruise would have been over.

I would not have let them rob me that easily. I will never know what happened if they had made it on board.

I’m happy and thankful that they did not succeed.

A squall, a simple gust of wind, precisely timed and sent at the right second, helped to prevent that pirates take over your boat.

To me, this was a miracle?